Teriyaki sauce is a classic Japanese sauce that is at the heart of so many of the best traditional Asian dishes. Discover how to make this sauce with our easy homemade teriyaki sauce recipe.

What is teriyaki sauce?

Teriyaki sauce is a Japanese sauce that has four main parts to it. It features soy sauce, sake, sugar, and ginger.

It’s an Asian sauce used in many dishes as a basic sauce and as a marinade. It serves both as a base and as a flavor enhancer. You can use it when cooking vegetables, meat, fish, or even tofu. It’s a versatile and flavorful sauce. It can also be used as a topping for different dishes or served on the side.

It has a savory, sweet, and yet salty taste, making it a great match with many dishes. As such, it has spread its wings across different cuisines, despite its Asian roots.

There are different ways to serve Teriyaki sauce since it is a versatile sauce. For example, teriyaki sauce can be served with grilled chicken as a sauce over it. This is one of the more common ways of using it. You can also add it to chicken or grilled steak, or seafood after it is cooked.

You can also use it on vegetables and fish. It can also be used as a glaze over seafood such as salmon.

Teriyaki sauce also pairs well with noodles and goes great with stir-fries. You can use it as your base sauce. You can also marinate meat in teriyaki sauce before grilling it. Baste skewers and kabobs with this sauce and enhance the flavor of the ingredients on it. Teriyaki sauce may also be used in place of barbecue sauce on burgers and ribs. Also, you can use it for recipes in the oven, broiler, or skillet.

You will also need cornstarch as a thickening agent and sake or mirin or honey to add sweetness. These are the essential ingredients for teriyaki sauce. However, there are additional ingredients that you can use to add flavoring to the sauce, such as rice vinegar, to taste, crushed pineapple, pineapple juice, garlic, ginger, sesame seeds, and thinly sliced green onions.

How to make homemade teriyaki sauce

For the basic homemade teriyaki sauce, you don’t need much. The first thing to do will be to mix the soy sauce, water, and cornstarch. Make sure they are whisked together thoroughly and adequately blended with no lumps. Then stir in the add-in ingredients that are meant to enhance flavors. Heat the mixture over medium heat for about 10minutes. Make sure to stir and whisk the mix so that it doesn’t boil down. Also, the sauce will quickly thicken, so this is one pot that you will have to watch boil.

As it boils, taste to make sure it has the elements that you want. If not, you can keep adding the flavor add-ins. 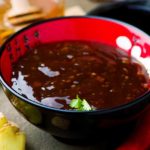 This is a simple recipe with a few essential ingredients. However, since you’re making it yourself, you can add a few more ingredients that make it more customized and suit your preferred flavor.
Course Condiment, Marinade, Sauce
Cuisine Asian

What’s the Difference Between Teriyaki Sauce and Teriyaki Glaze

Teriyaki sauce is the umbrella term for seasoning. Teriyaki glaze is made especially to apply to food after it is cooked. Even though it is made in the same way as teriyaki sauce, it has some extra ingredients that make it great for glazing. The added ingredients often include something to make it stick better, such as honey.

What’s the Difference Between Teriyaki Sauce and Marinade

Teriyaki marinade is made thinner to soak into the meat easier and more effectively, thereby infusing the distinct teriyaki flavors. Also, teriyaki marinade will contain ingredients that can tenderize the meat and allow the flavors to soak better.

What Is the Difference Between Teriyaki Sauce and Soy Sauce

Soy sauce is a seasoning method used in Chinese cooking, whereby the flavor of salt is extended. On the other hand, Teriyaki is a Japanese method of cooking that uses soy sauce as one of the ingredients. The main difference being that teriyaki sauce is a blend of ingredients with a sweet and tangy taste, while soy sauce is salty.

This website uses cookies to improve your experience while you navigate through the website. Out of these, the cookies that are categorized as necessary are stored on your browser as they are essential for the working of basic functionalities of the website. We also use third-party cookies that help us analyze and understand how you use this website. These cookies will be stored in your browser only with your consent. You also have the option to opt-out of these cookies. But opting out of some of these cookies may affect your browsing experience.
Necessary Always Enabled
Necessary cookies are absolutely essential for the website to function properly. This category only includes cookies that ensures basic functionalities and security features of the website. These cookies do not store any personal information.
Non-necessary
Any cookies that may not be particularly necessary for the website to function and is used specifically to collect user personal data via analytics, ads, other embedded contents are termed as non-necessary cookies. It is mandatory to procure user consent prior to running these cookies on your website.
SAVE & ACCEPT