This Finnish blueberry pie is a delicious twist on the summer classic. Made with a fresh blueberry and vanilla topping over a rich pastry crust, this Finnish dessert is bursting with flavor.

Finnish blueberry pie, also known as Mustikkapiirakka, is here to become your new favorite summer dessert. Instead of all-purpose flour and butter, this recipe uses rye flour to create the crust, which then cases in its blueberry, vanilla and sour cream filling. The end result is a pie with a creamy texture but with a tart bite that’s perfect for warmer seasons.

Mustikka, in Finnish, means blueberry, whilst piriika means pie. It is a decadent dessert that is halfway between cake and cheesecake. The addition of blueberries makes it light and fluffy, and a perfect end to a summer meal.

It has a crumby base, just like you would find on a cheesecake. It also has rye flour, all-purpose flour crust, and blueberry and sour cream filling, which also closely resemble tarts and cakes. So if you can’t quite decide on a dessert recipe, this is a good combination between the two.

While it is translated to blueberry pie, it is sometimes made from bilberries. In Finland, they were traditionally made this way. Both berries have similar properties and also similar nutritional benefits. Blueberries are used in American recipes, while the original finish recipe has bilberries. The main difference between the two types of berries is that bilberries grow singularly or in pairs, whereas blueberries grow in clusters similar to grapes. Also, blueberries have evergreen leaves.

The ingredients that you use in your recipe are primarily dependent on availability in your area. Because of this, blueberries are often used in American recipes instead of the traditional bilberries. You can therefore substitute one for the other. Use blueberries in place of bilberries.

The berries can be said to be the essential ingredient for this pie. You can either use bilberries, wild berries, or frozen blueberries. Blueberries are rich in nutrients. They contain anthocyanin, which is where the blue color comes from. They are not just pretty but nutritious too, with reasonable amounts of vitamin K and C amongst others. They are also rich in manganese, and fiber. They also help boost your immune system.

To make the crust, you will need rye flour and all-purpose flour. Rye flour is a good source of fiber, as blueberries are. So this makes the two a good match. You will also need melted butte crust for the crust, which helps soften the dough along with the egg. One of the characteristics of this pie is that it is sweet. Therefore, cane sugar works well for this recipe. Then you will also need baking powder which will help make the crust lighter, and vanilla extract.

For the filling, you will need sour cream, more cane sugar, and vanilla. You will also need cardamom, which is a fan favorite in Finland. Cardamom is an aromatic spice from the ginger family. It pairs well with blueberries and most baked goods, as it adds a hint of something blooming.

In total, it should take you about an hour to prepare the ingredients and bake. Thirty minutes for preparation and a further 30 minutes for baking. Preheat the oven between 350 and 375˚F.

Making Finnish pie is as simple as staring (pun intended). There are two things that you need, and these are the crust and the filling. With Finnish blueberry pie, you will need to use the ingredients mentioned above. Start by making the crust so that you can bake it before you put your filling in it.

Preheat the oven to between 350 and 375˚F. To make the crust, use room temperature butter, and cream it with cane sugar. Try to get it to be light and fluffy. Then add in the egg, flour, baking powder, and cardamom. You want to end up with a crumbly consistency that can be rolled into a ball without excess liquid to it.

Then spray the pie dish with cooking spray. The point is to make sure that it will be nonstick. Then roll out the pastry and lay it in the dish. Use your fingers to spread the pastry throughout the dish. Next, use your fingers, spread the dough around, have an even base, and cover the sides of the dish. You can then cut the top edges of the dough to make sure that you have a uniform thickness. The point is to create somewhat of a mold of the pie dish with the crust. Then blind bake the crust for about 10minutes.

As the crust is baking, prepare the filling. Mix the sour cream, cardamom, vanilla, sugar, and egg. You want the consistency to be liquid enough to pour. The next step is to prepare the berries. If they are frozen, coat them in flour so that they don’t stick to each other. Remove the crust from the oven, then pour the berries over the crust, spreading them evenly. Pour the sour cream over the berries, then put it back in to bake further, for about 20minutes. The crust needs to be golden brown.

Once it’s done, remove it from the oven and allow it to cool down for about 40 minutes or so before you serve. 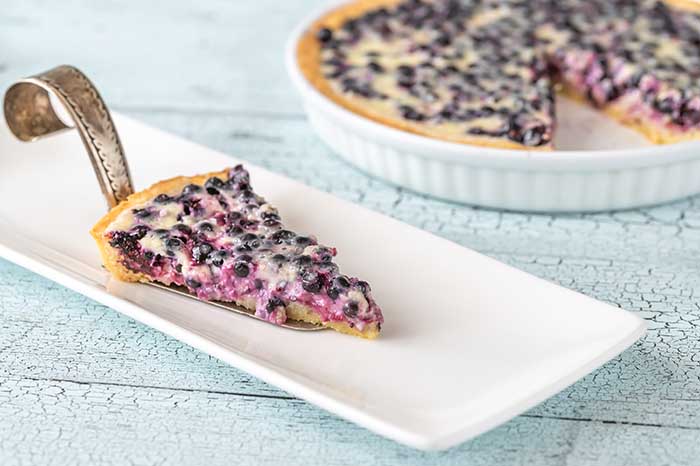 12 Best Stuffing Recipes for Your Thanksgiving and Christmas