This easy moussaka combines eggplant and lamb for a low-carb take on the Greek classic dish.

This keto-friendly, low-carb dinner is proof that you can replicate anything without compromising on any flavor. Layered with slow-fried eggplant, sautéed lamb, and a yogurt and parmesan sauce, you’ll soon why this is one of our favorite keto eggplant recipes.

Moussaka is a Greek eggplant dish that is traditionally known to be an integral part of Ottoman cuisines. The word moussaka is derived from the Greek word mousakás, which translates into chilled, akin to the Arabic term, musaqa’ah or the Turkish word, mussaka.  Moussaka is often confused with lasagna because it comprises layers of minced lamb as well. As with lasagna, it also contains tomatoes and cheese. Although this is the traditional way of preparing moussaka, different varieties do exist.

The dish continues to be adapted after having crossed the Greek borders, depending on. dietary preferences and the availability of ingredients.

For some, the substitutions depend on taste and perhaps allergies. You may have to exclude some of the ingredients in the traditional dish.

When it comes to taste, moussaka is a hearty meal with plenty of cheese flavors. The cheese makes the top crunchy, whereas the sauce brings all the flavors and ingredients together. It has an exotic edge over regular lasagna. The primary difference is that vegetables replace pasta in this meal. As such, it is a healthier version.

Some of the most popular variations are the Turkish and Greek variations that have garnered more attention than any other variation. The Turkish version of moussaka is similar to a casserole, as the eggplant is sauteed and always served at room temperature. The Arabic moussaka is eaten cold, while the Balkans version has to be served hot.

You can make turn this classic into a keto dinner recipe by replacing the potatoes for fried eggplant. Ensure that you remove anything carb-heavy from the recipe. Tweaking the sauce is another way of making it keto-friendly.

Lasagna vs. Moussaka: What’s the Difference?

First things first: moussaka has Greek origins while lasagna is Italian. This means the ingredients and flavors will lean towards the cuisine of the place of origin. Lasagna and moussaka are eerily similar in structure and ingredients. The major difference lies in the exclusion of pasta. Unlike keto moussaka, traditional moussaka may have potatoes in the mix. The exact differences depend on the type of moussaka you’re making.

How to store leftovers

Place the leftover moussaka in an airtight container in the fridge. This way, it will remain fresh for the next four days or so. The great thing about moussaka is that you can eat it while cold.

Can you freeze it?

Of course, you can. As with storing it in the fridge, place the leftover moussaka in an airtight container or Ziploc bag. This will keep it fresh for up to three months.

How to reheat leftovers

You do not need to serve moussaka piping hot. If it was placed in the freezer, you could leave it in the fridge overnight. The next day, heat it gradually in the microwave so that it reaches an almost warm temperature similar to room temperature.

Why is it important to salt the eggplant?

Salting is of utmost importance when you’re about to slice the eggplant. Salt is a drying agent. When salting the eggplant, you remove the excess water in the vegetable, which can ruin the entire dish. 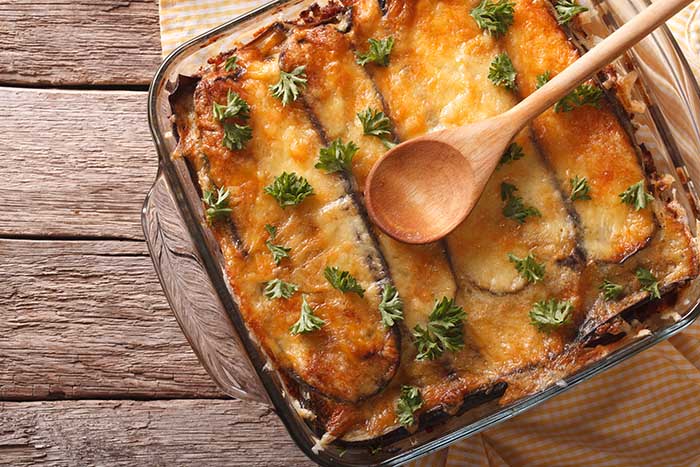 This website uses cookies to improve your experience while you navigate through the website. Out of these, the cookies that are categorized as necessary are stored on your browser as they are essential for the working of basic functionalities of the website. We also use third-party cookies that help us analyze and understand how you use this website. These cookies will be stored in your browser only with your consent. You also have the option to opt-out of these cookies. But opting out of some of these cookies may affect your browsing experience.
Necessary Always Enabled
Necessary cookies are absolutely essential for the website to function properly. This category only includes cookies that ensures basic functionalities and security features of the website. These cookies do not store any personal information.
Non-necessary
Any cookies that may not be particularly necessary for the website to function and is used specifically to collect user personal data via analytics, ads, other embedded contents are termed as non-necessary cookies. It is mandatory to procure user consent prior to running these cookies on your website.
SAVE & ACCEPT
6 shares