Easy vegan stuffing for plant-based Thanksgiving and holiday dinners. Made with fresh ingredients, toasted bread cubes, and vegetable broth, this hearty side dish will complete your holiday feast.

Stuffing is the classic herb dish that no holiday dinner is complete without. While traditional Thanksgiving and Christmas stuffing recipes used as a cavity filling for holiday meat dishes or with minced sausage, our plant-based version is completely free of meat, as well as eggs and dairy.

This hearty herb and seasoning classic is made with toasted bread cubes, fresh sage, celery, and onion as its core ingredients. This blend combines to create a filling stuffing dish that won’t overpower your holiday centerpiece, while still delivering a beautiful herb flavor that goes so well with Thanksgiving or Christmas dinners.

Best of all, this recipe takes only an hour to put together, with much of that time being spent allowing the final mixture to warm in the oven. Ideal for a busy holiday get-together when you’re juggling a hundred dishes at once! Let’s get into the recipe.

The best bread for stuffing is a firm loaf that is suitable for toasting. Try whole wheat or baguettes. Avoid soft loaves or pre-sliced bread as they won’t be robust enough to be cubed, and also won’t retain the moisture from the vegetable broth.

An easy ingredient to forget, chopped celery adds a subtle earthy flavor to this stuffing recipe, which underlines the herby tastes of the dish while helping to bulk it up. If you don’t have any or simply don’t like it, a good substitute for celery is chopped fennel stalk.

Fresh sage has a deep, savory taste with a hint of pepper which adds a delicately warm note of flavor to this stuffing. If you don’t have any to hand, rosemary is an excellent sage substitute.

Can You Make Vegan Stuffing Ahead of Time?

Yes, you can make the stuffing ahead of time and then freeze it, which reduces preparation time before serving it. You can freeze it at least a week in advance because it will be in the freezer, which means you can keep it for longer. Prepare the stuffing, just shy of baking it. This means that you should do all the steps.

You can store stuffing in the refrigerator, which will keep it fresh and ready to use. Put the stuffing in a separate airtight container to prevent it from getting wet so that it lasts longer. You can freeze the stuffing, but that means that you will need extra time for thawing and heating.

Can You Freeze Stuffing?

Yes, you can freeze vegan stuffing in a separate airtight container. It will last for up to 3 months.

How to Reheat Stuffing

The stuffing can be reheated in a microwave. Put it into a microwave-safe dish and cover with parchment paper or a microwave-safe lid. Heat it for about a minute and then stir. Repeat until it reaches the right temperature throughout.

To reheat the stuffing in an oven, you will need aluminum foil and a baking dish. Set the oven to 350°F and then place the rack in the middle of the oven. Put the baking dish on the rack, covered in the foil. Bake the stuffing for about 30 minutes. Then uncover and bake for a further 15 minutes to produce a crispy top crust. Alternatively, scoop the stuffing into a lightly greased muffin tray and bake at the same temperature for about 20 minutes.

You can also reheat the stuffing on a cooktop. Heat one tablespoon of oil in a skillet over a medium-high heat. Once the oil is hot enough, spoon in the stuffing and then flatten it so that it heats quickly. Turn it when it has been sufficiently heated on one side and looks like a pancake browned on one side. Heat for 3 to 5 minutes in total. 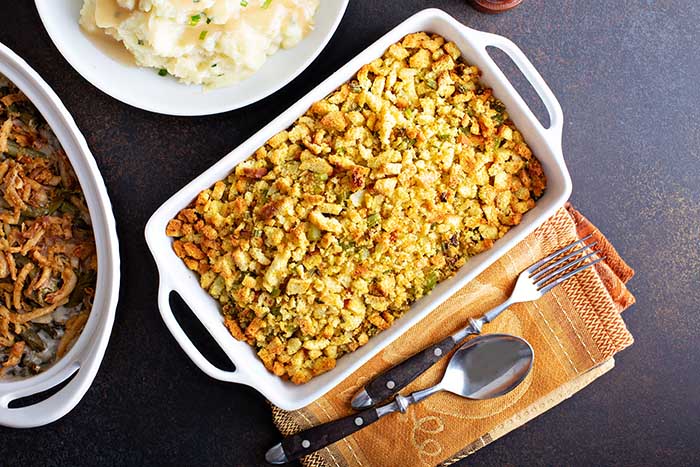 What to Serve with Chicken Nuggets [10 Best Side Dishes]