Spiced pork longanisa sausage served alongside fried rice and egg. Prepared in a herb meat cure and pan-fried for the perfect Filipino breakfast! Learn how to make pork longanisa from scratch with this delicious fried sausage recipe.

Ever had a longanisa? If not, it’s time you try this delicious Filipino sausage made from ground pork and spices. This sausage is often fried as part of the popular pancit bihon dish or boiled in soup. Here are some tips on how to cook longanisa so that it tastes its best!

Meet Longanisa, the Filipino sausage. It’s made from ground meat and stuffed into hog casings, then cooked slowly over low heat, turning it soft and flavorful as it cooks.

Most sausages in the Philippines are known as longanisa and is a word derived from the Spanish longaniza, which is a sausage similar to chorizo.

In the Philippines however, there’s an incredible number of different versions of longanisa, each with its own take on the type of meat used, as well as spices. For this recipe, we’re using pork, but there are versions using chicken, beef, and even fish.

Longanisa falls into two broad categories. One is ‘hamonado‘, which carries a sweet taste similar to ham (hence the name). The other style is garlicky or spiced, known as ‘de racado’.

For this recipe, we’ll be using a combination of sweet and garlic, but you can swap in or out ingredients if you have a preference.

How to Make Longanisa Sausage

Once prepared and cured, traditional Filipino longanisa is surprisingly simple to cook. There are two common ways of cooking it: One is to boil it; the other is to pan-fry it.

For our recipe, we’re going to combine the two. By doing so, this will help slowly turn the inside tender before we then finish it off in the pan to sear the outside. This ensures a tender and perfectly cooked pork inside, with a crispy caramelized outside.

With the sausage links cured, remove from the refrigerator and (if needed) allow them to thaw. Place them in a large saucepan and add a cup of water. While this isn’t enough to submerge them, we only want a little so that the water can evaporate and let the meat cook in its own oils.

Bring the water to the boil and then lower to a simmer. Once the water has evaporated, ensure the heat is on low and let the links cook in their own oil. If they don’t release much oil, add one or two tablespoons of cooking oil. Cook until golden brown. 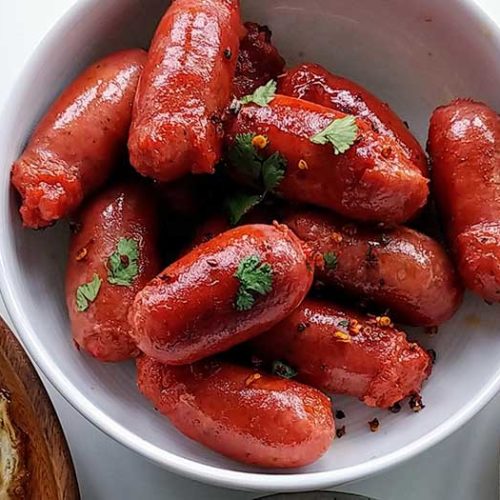 How to Make Tofu from Scratch

19 Cozy Vegan Fall Recipes to Get You Through the Cold