Delicious home-cooked black beans. This easy side dish is infused with onion, minced garlic, and orange juice for a delicious mouthful every time.

If you’re looking for a simple ingredient that’s easy to prepare and always ensures delicious results, you can’t go wrong with black beans.

This nutritious and unassuming food couldn’t be easier to prepare, and it can be used as anything from a main dish to a simple complement – and everything in between.

What Are Mexican Black Beans?

Black beans are a small, shiny black legume popular in many Latin American cuisines. They have a smooth, meaty texture that makes them a good addition to all kinds of dishes.

“Mexican black beans” refers to a particular kind of preparing beans also called frijoles negros in Spanish. The beans are simmered with spices including cumin to create a rich, stew-like dish. Mexican black beans are fragrant, dominated by the aroma of warm spices such as cumin.

Mexican black beans are rarely served on their own. Instead, they are a common filling for taco recipes, burritos, and similar dishes.

Pinto beans are another type of bean common in Mexican cuisine, but they are very different from black beans.

One of the biggest differences is their appearance. Pinto beans are larger and speckled brown in color while black beans are smaller and darker.

Their taste and texture also differs. Pinto beans are smoother, break down into a creamy texture when cooked, and have a milder, earthier flavor than black beans.

These differences also mean that the two types of beans are used differently. Pinto beans are softer and break down when cooked, making them the common base for refried beans.

Kidney beans are another common type of bean. Although they are popular in Mexican cuisine, they can’t be used as a substitute for black beans because they are very different.

In terms of appearance, kidney beans are larger and redder than black beans. They are also kidney-shaped instead of round (hence the name).

Kidney beans have a milder flavor, although they are still hearty, and are softer than black beans, particularly when they cook down.

Kidney beans are blander than black beans but they take on the flavor of the food around them, which is why they are popular in soups, stews, and chilis.

One of the main reasons that seem to turn people off cooking black beans is the need to plan ahead and soak the beans in water for a good 12 hours prior to actually cooking them.

According to conventional wisdom, this is an absolute requirement and failing to do so will lead to endless hours of waiting for the beans to fully cook.

But I have good news! If this technicality has been keeping you faithful to canned black beans rather than cooking your own, then fear no more.

After carefully experimenting with cooking beans soaked as well as unsoaked, we have noticed that unsoaked black beans don’t actually take that much longer to fully cook to perfect softness. In fact, you’re looking at an additional 10-25% time of simmering at most, which means that pre-soaking beans is arguably not as crucial a lot of people might think.

Do not take our word for it though – try it yourself and you’ll quickly realize that soaking beans can be regarded as a superfluous step in the modern kitchen setting.

And that’s not all. In case you’re worried the flavor of the beans won’t be as nice unless you soak them, you’ll be surprised to notice that unsoaked beans actually have a better taste and texture compared to a pre-soaked batch of the exact same beans. This holds true provided of course that you always keep the beans fully immersed in simmering water and pay close attention to the cooking timings, neither turning off the stove too soon nor too late.

If you’ve never cooked black beans before, you may be looking for a specific number in terms of cooking minutes that you can rely on to always get perfect results. Truth of the matter is that such an estimative cannot be easily offered, since the exact cooking time varies wildly depending on the black beans you use. Even when cooking batches from the exact same black beans you may find it will take more or less time depending on a number of factors, such as the power of your stove, the age of the beans, time of soaking, and so forth.

With experience, you’ll quickly develop a knack for telling how long until your black beans are properly cooked, just by glancing at them while they’re immersed in simmering water. In the meanwhile, you recommend that you let your black beans boil for just five minutes, and then let them simmer for a full hour. From there, you need to taste them every 5-10 until your black beans have the perfect consistency.

When Are Black Beans Done?

The most common method of preparing black beans is to simmer them in liquid until done. However, it can be difficult to tell when the dish is ready if you are not familiar with it.

You can tell if a black bean is cooked by its taste and texture. The bean should be smooth and creamy on the inside instead of hard. The skin will usually remain whole even after cooking.

Dried black beans can take 1-1/2 to 2 hours to cook, while canned beans are done much faster.

You can store black beans in the fridge or freezer. Drain the beans of their liquid and put them in an airtight container or sealed plastic bag. They can last in the fridge for three to five days or several weeks and months in the freezer.

To reheat leftover black beans, put them in a pot and let them simmer on low heat until they come up to temperature. You may need to add some more water to the pot because the beans absorb liquid as they sit in the fridge.

While cooking black beans is a straightforward matter (just boil them until tender), there are of course a few details that you can be mindful of to achieve the best results:

Make sure to cook your beans slowly in simmering water. Sure, it takes a lot longer than just boiling them, but you’ll end up with a much richer flavor and that beautiful, soft texture that we’re after.

There is no point in cooking your black beans on sautéed onion and garlic. While this may sound like a good idea, in theory, you’ll only lose time and energy and end with slightly inferior results. Simply simmer a few garlic cloves and a medium-sized onion along with the beans as you cook them; this will actually produce better tasting beans with the right amount of aroma.

This might sound a bit odd but bear with me… adding a whole orange (yes, orange!) to a pot of beans while they cook will introduce a subtle nuance of flavor that will raise cooked beans to a higher level. Make sure to remove the orange when your turn off the stove.

Now you’re familiar with the basics of cooking black beans from scratch, here’s an easy-but-delicious recipe to try out to get the most out of your favorite new bean. 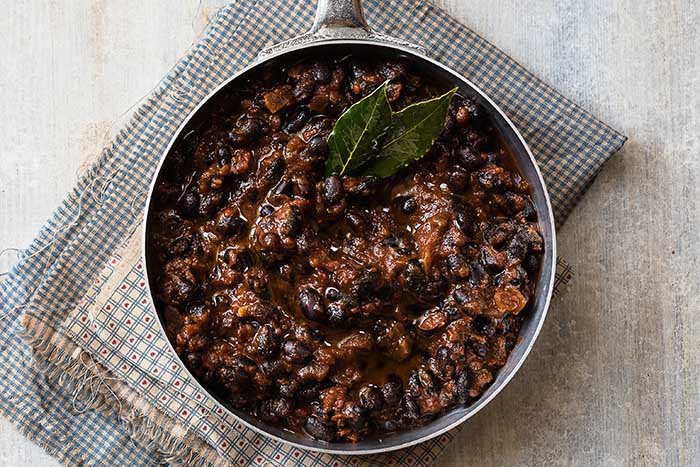