I’ve been trying to find new ways to make the most of my breakfasts, and had been struggling for inspiration. It’s not easy to find something that’s filling, tasty and not calorie-heavy at the same time.

While the fact that oats keep you fuller for far longer than some other breakfasts is nothing new, I’ve often found them quite stodgy and just a bit… unsatisfying.

So I’ve been experimenting!

While mixing blueberries into porridge or oatmeal is anything but revolutionary, I’ve found the inclusion of one ingredient has really made a difference: Flaxseed.

Often associated with its oil form, flaxseed is available in ground form and that’s what I’m using in today’s recipe. It has a slightly grainy texture to it, but it has a nutty taste and aroma that goes perfectly with the oats and pecans.

And its metabolism and mood-boosting properties are the perfect way to get your system in gear for the day ahead! 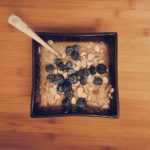 Pin
No ratings yet

This website uses cookies to improve your experience while you navigate through the website. Out of these, the cookies that are categorized as necessary are stored on your browser as they are essential for the working of basic functionalities of the website. We also use third-party cookies that help us analyze and understand how you use this website. These cookies will be stored in your browser only with your consent. You also have the option to opt-out of these cookies. But opting out of some of these cookies may affect your browsing experience.
Necessary Always Enabled

Any cookies that may not be particularly necessary for the website to function and is used specifically to collect user personal data via analytics, ads, other embedded contents are termed as non-necessary cookies. It is mandatory to procure user consent prior to running these cookies on your website.